Make a Splash is a pioneering programme that was founded as part of The Mayor of London's Olympic Legacy Programme, with one of its main objectives being to teach children who live in the capital to swim before they go off to secondary school. After 8 years running and some great achievements, we want to say thank you and well done to all those involved in the journey of making this a reality!

What have we achieved?

Between 2009-2017 Total Swimming has been honoured to deliver the Mayor of London’s Make A Splash programme, with 36 modular swimming pools built and 43,398 (mostly young) people having taken advantage of the subsidised sessions from Swim England qualified instructors.
The central supporters of the project were the Mayor of London, Swim England (the ASA) and Thames Water. The pools and programmes were built, staffed and managed by Total Swimming. School sessions catered mainly for those at Key Stage 2 (7 to 11 year olds) but also from nursery right through to young adults at Sixth Form. Community sessions ranged from family-fun sessions, parent and child lessons, women-only sessions and sessions sensitive to faith-specific needs.
In partnership mostly with local authorities and schools, sessions were delivered either free of charge or at a subsidised £2, encouraging and enabling Londoners from deprived areas to learn to swim and get active.
Celebrating success!
Each of the 36 projects were provided with a special celebration launch event at which an Olympian delivered an inspiring assembly to the host school, followed by a fun session in the pool with a class of school children.
Becky Adlington, James Goddard, Duncan Goodhew, Adam Whitehead and Sharon Davies all featured at schools across the capital – including through the 2012 London Olympic period. Each of these events received coverage in local press and online, as well as delivering an inspirational, memorable experience for those in attendance.
How does it work?
Delivered by Total Swimming in conjunction with the Amateur Swimming Association, Make a Splash has brought the pool to schools and communities across London, constructing a 12m x 6m steel tank swimming pool structure in an area that would usually have little or no access to aquatic facilities.
Having worked in some of the most underprivileged parts of the city, the programme is innovatively designed so that it encourages people of all ages to swim; from beginners to advanced skill levels, the pool hosts activities, events and lessons over a 12 week period that suit all abilities.
When running directly with schools, Make a Splash has enrolled pupils on a term-length course that aims to have all children swimming 25m unaided at the end of the term. Bringing the pool to the school has eliminated the time and logistical constraints that would usually put a halt on classes. 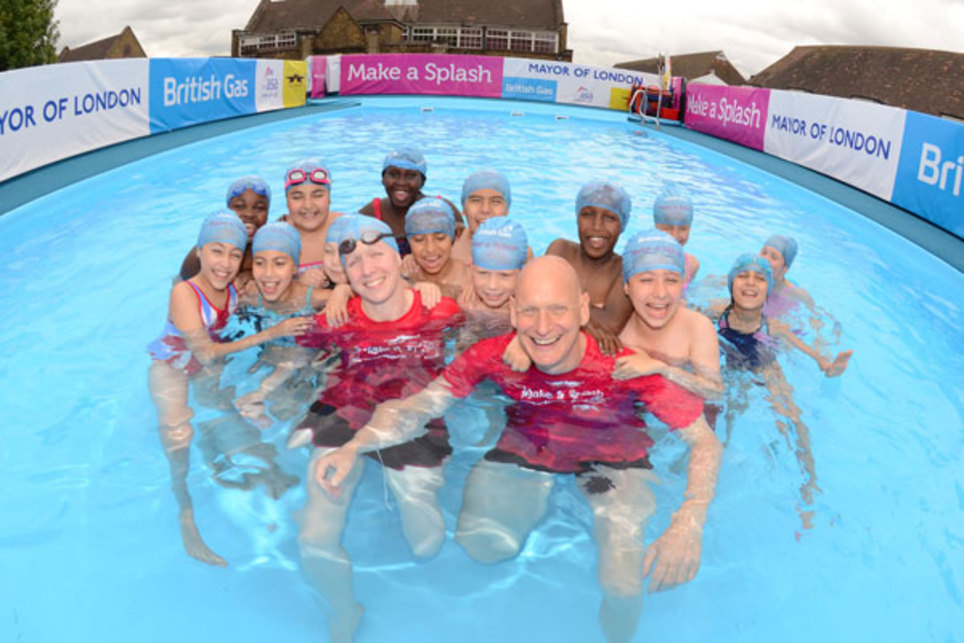